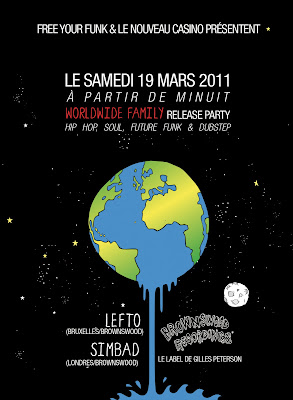 Last Friday in Gent was madness, 1500 peeps in 2 rooms with good sound-systems & 13 music performances in 1 nite , maaaaan the Democrazy crew & Lefto did an amazin job... I caught up a bit of Ghostpoet live, Kid Koala who smaaaaashed it to pieces with 3 turntables & only wax, playin rock/pop/funk/triphop/scratchin and doin solo of horns or guitar usin his vinyls, seriously this guy is a genius... Fatima kept it sexy upstairs, Grems kept it short but supa energetic (nuff reloads on his big tune), Frank & Alex delivered the good stuff on a tag-team work, Kode 9 & the Spaceape went deeeeeep (only caught the rehearsal tho as i was playin at the same time in the other room) , Tokimonsta also delivered nicely, mash-ups of classic & all sort of party tunes in da mix and everyone dancin', totally enjoyed Exile's performance on his MPC, propa skills propa grooves propa vibes in the place ! Then i jumped on around 2am, supa nice crowd and we went on dffrnt tempos all nite with Lefto joinin @ da end for a mad back to back, real open mindness was in the air that nite !! If you ever make it to Belgium make sure you pass by Gent as its also a beaaaaaautiful little town with plenty to visit and a strong medieval architecture, the 10 Days Off in july are crazy too... Check it !
Saturday took the train to Amsterdam via Antwerp (even took time to visit my bro K'Bonus & Elizabeth for the best pastramy sandwich in town as trains were delayed) and kinda arrived late which made me miss my slot on Phil Horneman's (Wicked Jazz Sounds) show on national radio, dnftly nxt time 4 sho' (his nite on sunday @ the Sugar Factory was bangin' tho, best sunday nite in Dam & goes until 6am...) .
Finally got to Canvas (in East) the place i was performing on the nite, its a restaurant/club on the top of a 7 floor building, real cool space & a great terrace that gives an open view on the city. It was dfntly an eclectic evenin'. Before my set (i was the last) some electro-funk band played, a YouTube dj was spinnin in the smokin area (playin only Youtube videos hahaha), a jazz singer warmed up the room just after the delicious dinner & Eric The Man (one of the daddy's of the Amsterdam scene deejaywise) dropped some dope ass hiphop , funk & techno... When it was my turn i had a full room of smilin people & every1 got on the groove, felt like a warehouse party in a way... Despite the bouncer askin me to stop my last tune @ the end, i still played 2 more while the lights went on and every1 was singin :-) No attitude, just good vibes and dancin'... Couldnt ask for more could i ??
Even found a minute to check Trouw (one the most legendary clubs in Dam) which was literally accros the street from Canvas. 1 big long room club wid deep house & techno comin out from the Funktion One and concrete floor. Berlin style...
I spent the nxt 2 days mainly in the Canvas building coz its all artists/studios & designers in it... Few of my friends are in there so cldnt help but check the studios héhé ;-)
I also recommend you to see Amsterdam & its beautiful canals, supa chilled vibe & mixed population. Can also be the city of vice @ nite tho, dont get me wrong lol ... But there's dfntly loads goin on on the alternative side of things, and if you ride a bike you can go everywhere easily, as its the common transportation there...
Massive thanx and shouts to : Lefto & Fatou, Dennis & Democrazy crew, Voruit Balzaal & crew, Kode, Spaceape, Exile & Jonathan, Fatima, Alex P, Frank A, Grems, Kwak, Bruno, All @ Canvas, Jorrit, Pitto, Sander & Overlast, INT, Denis & Sherisa (top notch brazilian brunch sunday niiiiice 1), Kid Sublime, Phil WJSounds & crew, Sugar Factory crew, Mark & All @ Rush Hour, Ardvaarck & Steven De Peven aka Rednose Distrikt aka my brothers from another mutti . 1 luv
OH YEA IF YOU'RE IN PARIS DIS SATURDAY YOU KNOW WHERE TO GO :-D
Posted by simbad at 21:59