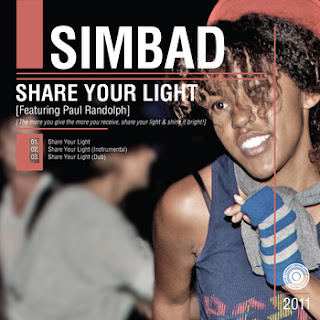 OUT NOW ON ATJAZZ RECORD COMPANY


One of the most original modern day producers on the planet joins the ranks at Atjazz Record Company. We are very proud to introduced the incredible ‘Simbad’. A man of many tempos and talents teams up with Detroits' vocal hero ‘Paul Randolph’ who has had a glut of success over the last few years featuring along side Jazzanova, Kevin Saunderson, The Reese Project to name but a few.

A very bright end to a very productive year for us here at the label as ‘Share Your Light’ really does breathe a fresh wind of uplifting energy for us all to digest before we set sail for 2012. Simbad pleasures us not only with a bonus dance-floor instrumental mix but with a deep spaced out Dub that will push the buttons of the more discerning dance-floors around the globe.
credits
released 23 December 2011
Written by P.L.S. Renouf & P. Randolph
Mixed & Produced by Simbad @ Key Recordings, London.
Vocals by Paul Randolph
Published by Healium Music / Westbury Music & RVP Publishing BMI
© & ℗ Atjazz Record Company 2011
Photo of Cracka Dawn dancing' by Velanche Stewart @ The Lift Party, Los Angeles 2011
Posted by simbad at 09:01