Interview + Mixtape For Get Some UK 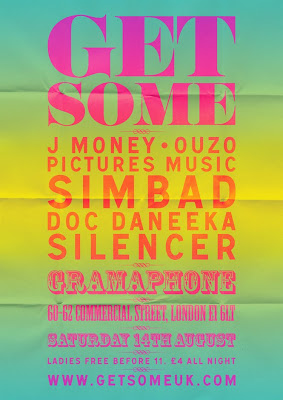 GET SOME INTERVIEW SIMBAD
Who are you and what do you do?
I make music & dj, have used many aliases when released in the past but im trying to stick just to Simbad deze days…

Where are you currently based?
Mainly in London but spending 1/3 of every year in da US

When did you first get involved with music and what were you doing?
As a teenager I picked up the saxophone and started playin in bands and got heavily into jazz & funk then moved to Paris in the mid-90′s where i was putting on Jungle & DNB nites with a crew, finally moved to London when i was 19 to pursue my dreams… Had to do many shitty jobs while playing with musicians on the side but got to do loads of session work in studios, mainly house & garage. Then met another french fella called Fred McQuinn and we started our own studio and label (we were releasing under Marathon Men) , thats when i really got into the whole production & record collecting (was workin in some record shops in Soho @ that time too)…

How has the music industry changed since you first got involved? In your opinion, has the online revolution has a positive effect on what you do and the music industry?
Well back in da days we would press a 12” and live of it for months easily (as music was selling well in general) and everything was much more ‘physical’ or hand on hand, whether in da studio regarding the gear (hardware equipement like compressors, mixing desk, reverb units etc…) , record releases or carryin crates of vinyl to your gigs you know ? The whole digital revolution had some positive effects regarding freedom of expression & exposure via non-physical mediums but the whole game has changed tremendously, not only money-wise but also substantially…

Like nowadays i feel the information behind a tune or an album has been lost, no more credits attached to it too much and the sound resolution in quality has somehow diminished and we’re getting used to it !! It seems that there’s a lack of knowledge in certain areas and that kinda bothers me coz its as if technology has made our brains regress instead of progressing, we almost leave the computer to do all the thinking and thats fucked up in my humble opinion… I mean its amazing what we can do now with computers just digitally in creativity and all that, but its important to know also what we’re worth just as simple human beings and how we relate to our context in different ways… Hahaha not that i wanna sound patronizing but you know what im sayin ???

Do you find there to be a prejudice against DJ’s who use MP3′s and is software like Ableton Live bridging the gap?
Mmmh not really, i mean again its a question of taste and creativity really… You can have the best tunes and not connect with an audience, wether its coz you’re playin’ low resolution mp3′s via your laptop (so the frequency spectrum of the music is totally diminished therefore we can’t feel it through the sound-system) or coz you just dont pay attention to the vibe and just look at your screen all nite LOL but naaaaaaah you can really exploit that digital side of playing in a positive way… Its about energy and emotions & fun @ the end of the day right? (and BASS hahaha)

Personally I still prefer vinyls and cds for the physical touch and the randomness of human error opposed to a robotic flawless pattern of a software… But thats me yo !!! Loads of my fellow dj friends do really great things with Serato and Ableton and i do admire them, somehow its all about being original and being yourself… The way you do it isnt too much of an issue no more… Just spread da love yooooo

What can we expect form Simbad in 2010?
Few singles about to come out on a few labels (Defected, 2nd Drop and a few others TBC) and still loads of remixes (Simbad Remixes VOL 2 due any minute on Key Rec.), gotta mix down some collabs projects too (with Cooly G, Deetron, Von D, Fred P, Karizma , Son Of Kick etc…) and more travelling i guess… The Donn T album that i produced in Philly in 2008 has just come out (she’s Questlove sister) and im still rapping up this booogie / funk project featuring some dope singers in the states for a respected label from LA… Also finishing a compilation for Brownswood Rec. with exclusive material from various peeps, quite exciting actually !

If your career in music was to end tomorrow, what would you do instead?
Good question haha ! I pretty much live day by day and find it a blessing to survive doing what i love so i dont think about it too much… Maybe i would retire to the Himalayas and become a buddhist monk LOL

Who should we be watching in 2010?
What you eat LOL !!! Musically ?? A singer from South Africa called Brian Temba, a french producer named Klimaax, the next Stereotyp album all gone juke style, some Mark Pritchard newness that is out of this world, guys like ID & Baobinga, Airhead, Midland, Trilogy or DNB cat Steve Lynx makin sick beats … The next Disiz & Grems album (the 2 best french rappers) … Labels like Night Slugs, Deep Teknologi, Record Breakin’, Numbers plus all your favourite producers and bands haha

And finally, please complete the following sentence…
GET SOME… love (let’s)