From Zagreb to Belgrade via Romania... 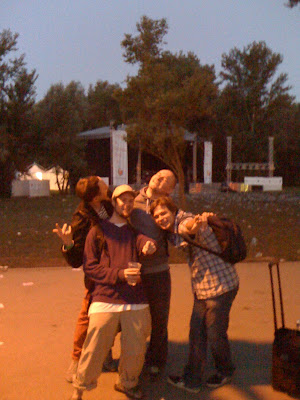 Last week was a mad one, 1st went to Zagreb to play with my croatian brother Eddy Ramich, we were closing this huge festival (INMUSIC) by the lake in a massive tent, after a really poor performance by Massive Attack (i must admit)... But luckily da youngsters stayed and we had a blaaaaaaaaaaaast !!!! Probably one of the best outdoor gigs i had dis year, really open minded crowd, smiles & fantastic energy all around.Its a very different thing to play big crowds from little clubs but i love it. Musically Eddy & i went all things house, fonky, dubstep & DNB, kinda BASSY but really proper fun ! !!!! Saw briefly Josef & Christian from Ame who were playin on the other side of the site, good laughs in da mornin@ the end of the nite :-)
Went straight back to London & caught up with my brother Karizma from Baltimore, we hung out in the studio 4 a bit as its been a while & made plans for the future, good things are coming to those who wait, as the sayin says ;-)
So yea then no sleep as i left @ 5am to the airport to catch my 8am flight to Belgrade,
nightmaaaaaaaaaaaare daaaaaaaaamn the flight was 4 hours late ... Basically ended up landing in Timisoara (Romania) in the late afternoon so a driver could pick me up to cross the boarder to Serbia... What a jooooooourney shhhhhhhhhit (im not gonna start on that one lol)... Finally arrived in Belgrade around 10-11pm, the fact that i still had no sleep probably helped me to stay zen hahaha ... Anyway, after a good meal with Schwabe & Goran (the promoters of the party) i headed up for a shower, an hour sleep & booooooom off to the club which was on a boat & on the Danube river. Really good vibes but honestly i was riiiiiinsed out, played a few hours & went 2 sleep as the sun was comin up... A rainy sunday but Nec, Niko & co took care of the brunch, absolutely gorgeous restaurant, we watched a bit of the worldcup & had even time to get some good brown bread to bring home...
Props to Eddy, Jozef & Christian, Nikola & Camille, Necone, Julia & Ivan, Goran & Schabe. WIZZ airline NEVER EVER AGAIN tho  !!!!
Posted by simbad at 23:35