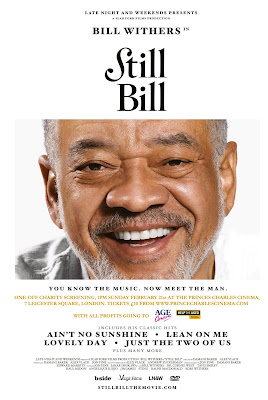 Showing this sunday in London...
http://www.princecharlescinema.com/indexdown.php?display=1163

Still Bill is an intimate portrait of soul legend Bill Withers, best known for his classics “Ain’t No Sunshine,”

“Lean On Me,” “Lovely Day,” “Grandma’s Hands,” and “Just the Two of Us.” With his soulful delivery and

warm, heartfelt sincerity, Withers has written the songs that have – and always will – resonate deeply

within the fabric of our times.

of this fascinating man. Through concert footage, journeys to his birthplace, interviews with music legends,

his family and closest friends, Still Bill presents the story of an artist who has written some of the most

beloved songs in our time and who truly understands the heart and soul of a man.

“As long-time Bill Withers fans, we were honoured that he let us into his life and shared the story of his

years later, we look forward to working with B-Side to impart that story to other fans who, like us,

wondered what became of the talented man behind so many classic American songs.”

And now the film is coming to London.

On Sunday February 21st at 1pm at the Prince Charles Cinema, we are screening the 77-minute film.

You will laugh, you might cry, you will sing along, clap your hands and stomp your feet and at the end you

will feel like the world is a better place than when you went in.

Every single penny of profit is going to Help The Aged & Age Concern, whose staff will be joining us.

And there will be an exclusive after-party for ticket holders where you might even hear a few more tracks.

So please visit http://www.princecharlescinema.com/events/index.php and buy your tickets now. The